Reaching out to those at risk of suicide

According to the recently released World Health Organization (WHO) report: Preventing Suicide: A Global Imperative, over 800,000 people die by suicide across the world each year. The report notes that this estimate is conservative, with the real figure likely to be higher because of the stigma associated with suicide, lack of reliable death recording procedures, and religious or legal sanctions against suicide in some countries.

We may not be able to pinpoint the exact figure, but we do know that each individual suicide is a tragic loss of life. It is hard to imagine the extreme psychological pain that leads someone to decide that suicide is the only course of action. Reaching out to someone who is struggling can make a difference.

‘Preventing Suicide: Reaching Out and Saving Lives’ is the theme of the 2015 World Suicide Prevention Day (WSPD), an initiative of the International Association for Suicide Prevention(IASP) and the WHO, a co-sponsor of meetings and events related to WSPD 2015.. Since 2003, WSPD has taken place on 10th September each year. It serves as a call to action to individuals and organizations to prevent suicide. This year, the theme encourages us all to consider the role that offering support may play in combating suicide.

The act of showing care and concern to someone who may be vulnerable to suicide can be a game-changer. Asking them whether they are OK, listening to what they have to say in a non-judgmental way, and letting them know you care, can all have a significant impact. Isolation increases the risk of suicide, and, conversely, having strong social connections is protective against it, so being there for someone who has become disconnected can be life-saving.

Reaching out to those who have been bereaved by suicide

Suicide is devastating for families, friends and community members who are left behind. They may experience a whole range of emotions, including grief, anger, guilt, disbelief and self-blame.They may not feel that they can share these overwhelming feelings with anyone else. Therefore, reaching out to those who have lost someone to suicide is very important.

As a result of the stigma surrounding suicide, those who are bereaved by suicide are often perceived differently from those who lose a family member through another cause of death. People who are bereaved may find that they are avoided by people who don’t know how to broach the subject or offer their condolences. Or they may just feel that others do not understand the intensity of their emotional response to the death of their loved one.

Once again, a pro-active approach and offering a sympathetic, non-judgmental ear can make all the difference. Giving someone who has been bereaved by suicide the opportunity to talk about their loss, in their own time, on their own terms, can be a precious gift. Allowing them to express their full range of feelings can be cathartic, and can help them to take the first small step in moving through their grief. Starting the conversation may be difficult, but it will almost certainly be appreciated.

Reaching out to put people in touch with relevant services

Although the support of friends and relatives is crucial for people who may be at risk of suicide and for people who have lost someone to suicide, it is not always enough. Often more formal help is also needed. Such help can take many forms, and is likely to vary from country to country. In high-income countries, it may include specialist mental health services and primary care providers, both of which offer clinical care. It may also include a range of community organisations which provide non-clinical support, as well as support groups and self-help groups. In low- and middle-income countries, the more clinically-focused services are less readily available, and there is a heavier reliance on community organizations. Part of reaching out to vulnerable individuals can involve helping to link them to relevant services.

Reaching out to the suicide prevention community

There is strength in numbers. Around the globe, many individuals and organizations are involved in efforts to prevent suicide. We can learn from each other, and strengthen the evidence base for effective interventions. Reaching out to those who are travelling the same road increases the likelihood that our collective efforts to reduce the numbers of people who die by suicide, and the numbers of people for whom these deaths have shattering effects, will be successful.

On September 10th, join with others around the world who are working towards the common goal of preventing suicide. Check in on someone you may be concerned about, listen to what they say, how they say it and show them kindness and support. Investigate ways of linking in with others who are trying to prevent suicide in your community, your country, or internationally. Show your support by organising or taking part in a WSPD activity in your area and/or join in with IASP’s Cycle Around the Globe.

Please, reach out and save lives. 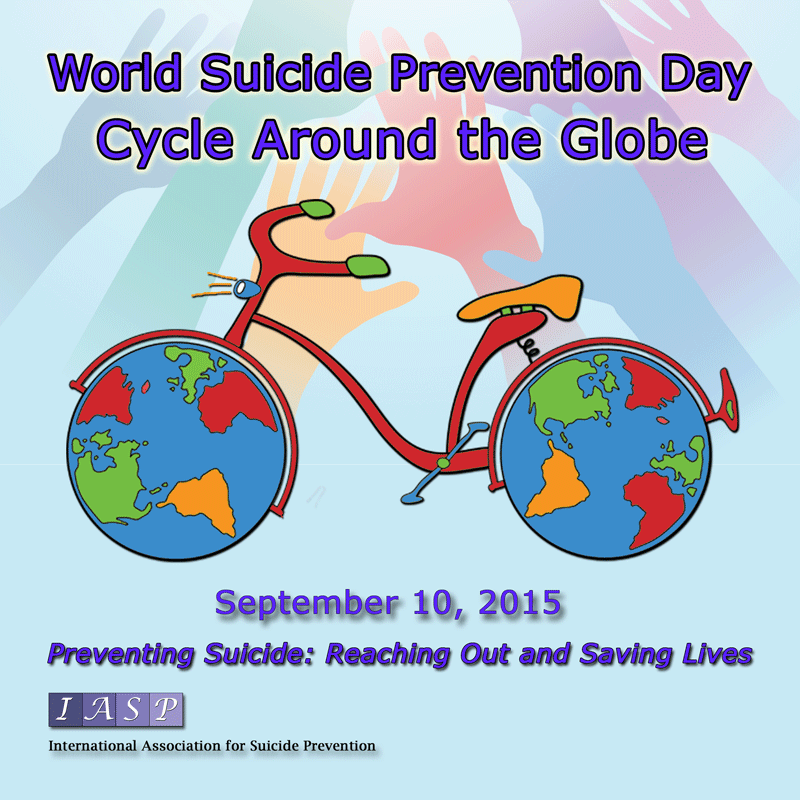